Lying in the south of Uttar Pradesh, on the banks of the holy River Ganga, breathes Varanasi, which is believed to be the oldest living city in the world. For centuries, this mystic place has been attracting pilgrims from across India as well as abroad. A dwelling of ancient domes, muths, ashrams, priests, narrow lanes with shops filled with Benaresi sarees, Varanasi represents the colorful and fascinating India of your dreams. With intimate rituals of life and death being parallely performed on the Ghats, you’ll find it exhilarating to explore the religious geography of this city. Walk through the busy alleyways or watch the sunrise from a boat for an unforgettable experience. Trace the perimeter of the city, paying homage to shrines all the way. Who knows, a journey to this City of Light may turn out to be your favourite stop of all.

But in my last trip to the city I saw, it is changing with time. My earlier work in black and white, hence now wears new colours in this part. I hope and wish to carry on with the project. 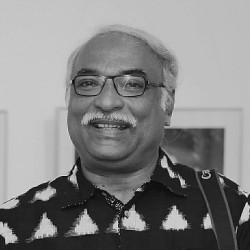 Nilanjan Ray (b. 1959) has a handful of exposed stock on “Human Interest” and keeps stock of other people’s money in a Bank since it is his profession.

Another Solo Photography Exhibition on “FAITH – A QUAINT EMOTIONS” was organized by INDIA INTERNATIONAL CENTER, NEW DELHI from 29th Novemvber,2016 to 9th December,2016.

Other than above, his photographs have been selected for exhibition at British Council, UNICEF, ACADEMY OF FINE ARTS, Calcutta, LALIT KALA ACADEMY, New Delhi etc.

Nilanjan's photographs have also been selected for a Book ”Framed City” – published at Indian Art Festival, New Delhi and also for a Book called “INDIA- 5 Senses“ by Roli Books.

Besides, his photographs & articles have also being published regularly in leading daily Newspapers and Magazines.

Find more of his work here: