Trapped ÔÇô Hell is round the corner
Documentary 23rd December, 2017

Since 2014. over a million of refugees from Syria, Afghanistan, Iraq and Pakistan passed through Belgrade, trying to reach new life in some of the EU countries. They passed so called “Balkan route”, included Greece, Macedonia and Serbia.
In the summer of 2015. Hungarian border police put the iron fences over the border in attend to stop refugees. They succeeded in that. But, there were a couple of thousands of them who stayed in Serbia. Among them, over a thousand tried to cross the border on their own. They refuse to stay in the camps, already overbooked by refugees.
Most of them squatted three abandoned warehouses in the central area of Belgrade, place once upon a time called Savamala, now days place of future Belgrade Waterfont. They organized their life in those ruined facilities, in a very poor and dehumanized conditions. During the past winter, after the first snow, hell of the place showed its real face.
This is the story about them, about three months of suffering and struggle to help them and spreading the word worldwide, showing conditions they live in.
I took first photos in November of 2016. Since I uploaded them on my Facebook profile, photos became viral and shared over 1800 times. Reactions were enormous and emotional. In a short period of time, a large number of activists, led by those photos, came on their own from all around the Europe to help refugees in Belgrade.
These photographs were published in various printed and online media all over the Europe and social media groups, showed on various group and solo exhibitions in Belgrade, Thessaloniki, Athens, London, Berlin, Milano, Brussels, Lisbon, Valladolid and European Parliament in Strasbourg, France, as a great finale. And still waiting to be shown in future.
This story is reminder on how life can be hard and how freedom may became legendary. And how individuals with empathy from all over the Europe can be united in humanity. 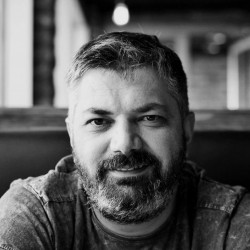 Igor ─îoko was born in Knin, Croatia in 1975.  He holds a degree in Ethnology and Anthropology. In his role of visual anthropologist, he uses his camera to capture and explore the sensibility of the street life, its people and life of stigmatized social groups. He is an editor in chief at the Grain photo magazine that showcase street and documentary photography. His photographs are published in leading magazines and newspapers from former Yugoslavia states and Europe, and thematic street photography e magazines and websites around Globe. He exhibited his work in Serbia, Croatia, Macedonia, Italy, Greece, USA, Spain, Portugal, France and Romania. He lives and works in Belgrade, Serbia.